General election 2017 – what does this mean for UK businesses?

It seems like only yesterday we were blogging about the potential impact of the last general election.

Yet here we are, gearing up for the next general election vote to be held this June.

Yes Brenda, another one!

The post-Brexit political storm continues, with Theresa May looking to secure her position before she enters the complex negotiations that will precede our withdrawal from the European Union.

The polls are well in favour of the blue corner, but announcements being made by opposing parties could chip away at their lead.

As the debate heats up, what will be promised for small businesses? What changes will be proposed for the British workforce? We are only a couple of weeks in and are already witnessing big claims from the major parties.

First things first. What do all the major parties have in common? They all know that Brexit is inevitable. Talks are less about the possibility of another referendum and more about the type of Brexit we are heading towards – soft or hard.

Labour has recently been very vocal about several key issues, already making a number of key announcements. They want to guarantee the rights of three million EU nationals currently living in the UK, alongside pressing for a reciprocal guarantee for UK citizens living in the EU.

Under Labour The National Living Wage would also rise to £10 per hour. It is welcome news for employees on lower incomes – but can many businesses afford to pay it? Some argue that the cost of employing people is already too high. On top of this, Labour is proposing an extra four bank holidays for the British workforce. That’s four more days of greater spending, but it’s also four more out of work. We’ve discussed the potential impact of extra bank holidays here.

Most parties are reluctant to change the working rights we have adopted from the EU – the government confirmed this last month when announcing the Great Repeal Bill. Labour will make movements though to replace the government’s Great Repeal Bill, guaranteeing the continuation of workplace protections enjoyed by UK workforces and set by the EU.

Other parties are just starting to forward their key campaign messages. The SNP are pushing against a hard Brexit and government cuts in Scotland. Their goal is the realisation of an independent, pro-European Scotland. UKIP are focusing their campaign on socio-cultural issues as their fight for British independence from the EU comes to an end. To capture voters’ imaginations, last week their leader proposed to ban the headscarf that most users wear for religious and spiritual reasons. 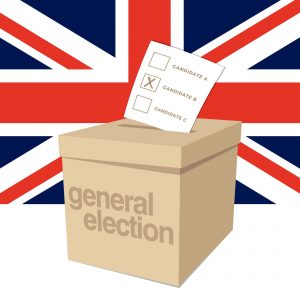 Small businesses will always be a hot topic

This general election has come at very short notice, though most parties are now finding their voice and formulating their key campaign messages. We are yet to see a manifesto, but we’re certain that small businesses and employment will remain key battlegrounds of the campaign. Keep an eye on our Twitter for updates and make sure you’re signed up to email alerts.

A little closer to home, have a read of this article on maintaining political etiquette in the workplace. We’ve got some ‘top tips’ for preventing political debates and upset on your time.

Where to find your next hires after the Great Resignation

Aligning your people strategy with your company values

Three Christmas films with a little editing from HR

Gift giving in the workplace with a reimagined Secret Santa

Are staff entitled to the extra bank holiday in 2022?

What has and hasn’t changed for the work Christmas party?

What to do when an employee keeps forgetting things

Has your business made a Climate Commitment?