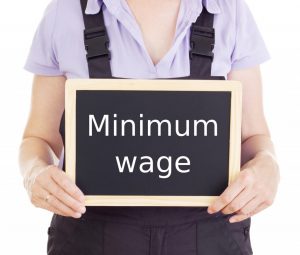 If you didn’t already catch it in our People Matter newsletter, or on the radio, or the television, or anywhere else for that matter, from April 1st the Statutory Minimum and National Living Wage rates for employing people are going to increase.

The increase is across the board, affecting apprentices to workers of all ages. The rates are listed below*.

Annual increases such as this play an important role in ensuring the welfare of the lowest paid in our society. Paying your staff well for what they do is a no-brainer if you want to attract and retain talent; money isn’t the key to happiness, but it helps get them to turn up!

Managers of small businesses, more often than not, would love to be able to offer their staff more for their work. It’s just not always feasible. So when the legal minimum goes up, small businesses are going to be first to feel the pinch.

Businesses need to adapt to their environment to survive. Your wage bill is increasing.

Not paying the increased rates is not an option, so what’s your strategy going to be?

Dismiss staff that qualify for the National Living Wage.

No! This is not an option either. Do this and your employees will be able to claim automatic unfair dismissal. Employment law prohibits employers dismissing their staff for qualifying for any minimum wage bracket.

Make redundancies to off-set the impact of the raise.

Be careful. Redundancies are valid if there is a genuine business case and it is the roles not the people who become at risk of redundancy. If you were to target workers entitled to the National Living Wage (aged 25 and up), tribunals would very quickly see this as a sham. Age discrimination might ensue with unlimited compensation!

This hasn’t worked well for them. Uber drivers took Uber to tribunal for workers’ rights and won, as have City Sprint. There are more cases in the pipeline. The government are looking into this area. We at The HR Dept actually went to Parliament to give our thoughts on behalf of small businesses.

Good idea. Simple ways of improving communication can improve productivity as can the benefits you offer. Many benefits such as cycle-to-work schemes and healthcare cash plans benefit the employer and the employee. They are really cost-effective as a motivational tool.

Fail to pay the new rates?

Not a good idea. You could be fined up to £20,000 per worker on top of their due wages. Arguably worse is the stockade: the government is actively naming and shaming employers that fail to pay their employees properly, proving that some bad publicity really is bad publicity.

The rates rise annually, so this isn’t a one-off. SMEs need to factor these costs into their plans and have a strategy for dealing with them. We can help you to find yours. Get in touch.