A new trading partner: The HR Dept signs deal to launch in Australia 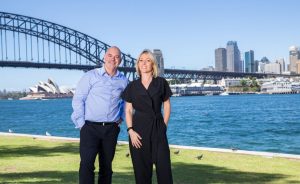 Nationwide UK outsourced human resources company The HR Dept has signed a deal to launch its services into Australia, in a master franchise with a difference.

Gemma Tumelty, managing director of The HR Dept, which was founded by her mother Sue in Bristol in 2002, has signed the agreement with Sydney businessman Brad Adams for taking the brand Down Under.

Considerable research has been done prior to the deal to establish the differences between the two countries’ HR legislation, research which Ms Tumelty hopes other UK firms looking to expand to Australia could benefit from.

The deal represents the culmination of a two-year project – one to research and one to secure the deal – which she believes could be the first of many similar SME deals as Britain looks for additional trading partners after it exits the European Union.

But there is more to the venture than the master franchise fee and working capital, that Mr Adams has invested for the Master Franchise and shareholding in the new company. HR expert Pia Engstrom has been appointed as the company’s first independent franchisee and has also become a shareholder in the company.

And in a true business partnership, The HR Dept in the UK has also invested working capital to support Mr Adams, in return for management service fee and shareholder dividends.

The 10-year deal will see Mr Adams maintaining responsibility for growing The HR Dept nationally, focusing on bringing on new franchisees and supporting them to succeed.

Market research by The HR Dept has identified potential for around 80 franchise sales to provide HR services to SMEs in Australia and Mr Adams and Ms Engstrom have already set up in the Lower North Shore area of Sydney and Perth respectively.

The HR Dept is a Bristol-based family business which was set up by Sue Tumelty in 2002 and begun franchising in 2005. Today, it has a network of 65 Licensees operating independent HR businesses in 83 territories across the UK and Ireland, providing more than 5,000 SMEs with a range of advice and support.

Gemma Tumelty, Sue’s daughter, is a former president of the National Union of Students who left a career in politics and communications to take over as managing director of her mother’s company.

She said she hoped other UK SMEs would learn from planning and research that The HR Dept has done to complete the Australia deal, and that they would see her company’s move as an example of how UK businesses can forge new ventures abroad post-Brexit.

She said: “We are extremely excited to see the HR Dept brand going international and it’s something we’d never have dreamed of when we first started.

“In some ways Australia was an obvious new market for us, despite the distance. The language, cultural and business similarities and the legislative cross-over meant that we have a lot in common. This common ground greatly helps us to provide up-front and ongoing support to Brad’s new venture.

“As the UK looks to leave the European Union it is important that businesses of all sizes look further abroad for ways to achieve growth and success.

“However it has taken significant amounts of time, research trips, expense and effort for us to reach this point and businesses looking to trade in Australia or indeed export generally should be under no illusions about the complexity of doing so.”

Gemma Tumelty of The HR Dept added, “Many UK businesses may be seeking to operate or already operate in Australia – with The HR Dept in operation in both countries we can support the flow of information and help businesses to grow too. Any UK company wanting to open offices and take on staff there need to be aware of the stringent HR regulations and we can offer our expertise here.”

Master Franchisee, Mr Adams is a new market entry specialist with an extensive background in business management and transformation and an MBA from Macquarie Graduate School of Management. He said: “This is an incredibly exciting opportunity for me and my team as we establish The HR Dept as the go-to provider for outsourced HR advice and support for Australian SMEs.

“The brand already has significant presence nationwide with my franchise in North Sydney and Pia’s in Perth. The HR Dept is a highly successful UK business and I am confident that the need from SMEs to deal with complex employment legislation in Australia is just as great as the need in the UK. Despite the differences in Australian HR regulations, the business will see similar success here also.”

What do new customers think of our HR services in 2018?