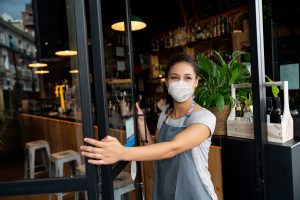 Shops are being told to reopen from June but furloughed staff can only work part time from August. Indie retailers face a dire couple of months.

Shop owners are questioning why the government is only okaying furlough staff to work part-time from August, despite encouraging them to re-open next month.

Small retail businesses face a disastrous couple of months before furloughed staff are allowed to come back part-time, with office workers staying away and restaurants and bars closed.

Kate Evans owns independent fashion boutique Precious, which is based in the City of London and whose customers include City workers now working from home.

Evans said: “With offices and restaurants closed, we don’t know how much demand there will be when we reopen next month. The government says it wants independent retailers like us to reopen. Yet we can’t take back furloughed staff to work part-time during these crucial next couple of months. This all-or-nothing approach doesn’t make sense. The furlough scheme needs to be more flexible to support reopening.”

Many independent retailers are planning to reopen on a part-time basis initially.

Lobbyists say that the Treasury to open up the furlough scheme now to allow part-time work in retail, what with demand so weak. By August, many are afraid there will be no shops for part-time workers to come back to.

On Tuesday, chancellor Rishi Sunak announced that the Coronavirus Job Retention Scheme will be extended until the end of October but that furloughed staff will only be allowed to work part time from August.

Andrew Goodacre, CEO of indie retail association Bira, said: “It would make more sense to have the flexibility available as from June when retailers can hopefully re-open, and now retailers will be faced with the dilemma of which staff to bring back.”

According to research from the Federation of Small Businesses, one in three small businesses which have temporarily shut fear they will never reopen again.

Seven out of 10 small businesses have furloughed workers, and three quarters (74 per cent) of those businesses which have put staff on furlough say that part-time furloughing would help them.

Mike Cherry, national chairman of the FSB, said: “Part-time furloughing is not a nice to have, it’s fundamental to saving jobs.

HR consultancy The HR Dept has been campaigning since April for the government to allow small businesses to pay workers part-time with the government contributing to the remaining wages.

Jill Bottomley, a director at The HR Dept, said: “It is a good point about retail amongst other sectors, especially smaller retailers. Footfall will be less because many people are still at home, so numbers in shops will be fewer and staff won’t be needed full time.”

Bottomley points out that retail must respond to sudden spikes in demand whether it’s a national holiday or days of good weather. Having to put staff on furlough for three weeks – the minimum – and then take them on again is too restrictive, Bottomley said.

The HR Dept has proposed an additional “short time working scheme” and for non-working days to pay not the guarantee statutory pay of £30 per day (currently at a maximum of five days) but the same 80 per cent rate of daily pay, capped at circa £115 per day.

A survey of more than 900 businesses conducted a fortnight ago by The HR Dept showed that 82 per cent of small firms back the introduction of a “part furlough” scheme.

Bottomley said: “It is great news that the government will be introducing a ‘part furlough’ intervention. However, the part furlough element needs to be introduced now to give employers the flexibility they need.”