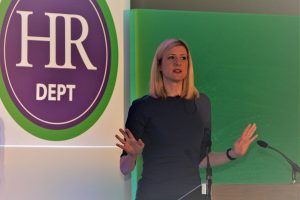 Flexible working can be key to cutting the skills gap and boosting UK productivity, according to Claire Walker, co-executive director of policy and campaigns at British Chambers of Commerce (BCC).

Citing research which suggests the number of UK services firms currently recruiting is at its lowest for 25 years, she urged British businesses to embrace new ways of working.

Despite record high employment across the UK she said productivity was failing to keep up, with output increasing by just 0.2% since the financial challenges of 2008.

Ms Walker was the keynote speaker at the annual conference of Bristol-based outsourced human resources specialist The HR Dept, which serves over 6,000 SMEs in the UK through a network of 67 franchisees.

“What is clear,” she said, “is that across the UK more people are working but they’re not delivering more. This means the UK isn’t getting the most out of its own people or their skills.

“We regularly hear, either directly or via social media, of talented, skilled workers who have been forced to seek roles for which they are massively overqualified for or which pay less because they want and need flexibility.

“This often leaves people working below their skill base in part-time roles and it is not making the most of our talent or fulfilling its productivity potential.

“There is a growing evidence base in this area. Recent research from New Zealand showed that reducing working hours to four days a week improved staff wellbeing and productivity. A similar landmark report published by the Harvard Business Review also suggested that remote or home working could increase productivity, reduce the cost to employers of office space and reduce the impact of commuting on the environment.

“Flexible working retains talent and institutional knowledge, it promotes diversity and inclusion and it also breeds a positive staff culture which means employees are trusted and valued for the contribution they make – and not the time they spend in the office – reducing attrition.”

Ms Walker job shares in her role at BCC with her co-executive director Hannah Essex, after the pair were jointly headhunted from their previous role, then interviewed and employed together.

“At every stage of life,” she said, “many people are seeking greater flexibility, whether it’s mums like me and Hannah balancing professional and maternal responsibilities, dads looking to get involved with their families, older workers with caring responsibilities for elderly parents and brand new grandchildren, or millennials looking for optimal work-life balance.”

And she said the reticence by businesses to adapt to new cultures was as least partly driven by fear of the unknown and a stigma that flexible workers are less committed to their roles.

“Hannah and I hope that our appointment – together – to the executive of one of the leading business organisations in the country will challenge perceptions about what roles that can be done flexibly,” she said.

“The Government is making good inroads into developing a changing culture, with evaluation, review and endorsement of genuine two-way workplace flexibility.

“At the BCC will we will be working on a range of issues on behalf of the Chamber network so that we can ensure Britain thrives now and post-Brexit. We believe that for the UK, embracing a new way of working would be a great place to start.”

On Brexit, she said that BCC is not making any “snap judgements” on the merits or otherwise of the proposed withdrawal agreement but is “working hard to assess the real-world implications”.

However she said that, regardless of Brexit, there are some business critical issues in the UK which urgently need fixing.

She said: “BCC has been calling for a greater focus on ‘fixing the fundamentals’ of the UK business environment. We need to remove barriers to growth; from tax breaks for the high street, to better mobile coverage and reform to the apprenticeship levy.

“Our members across the UK tell us that finding the people with the right skills is becoming harder. Brexit and the uncertainty for the future of non-British workers has only added to their worries. Perhaps we as a country need to redefine what productive, future-facing employment could and should look like.”